We outsourced development of V1 to release our public beta fast. Got early exposure, and then prepared marketing material to go public. 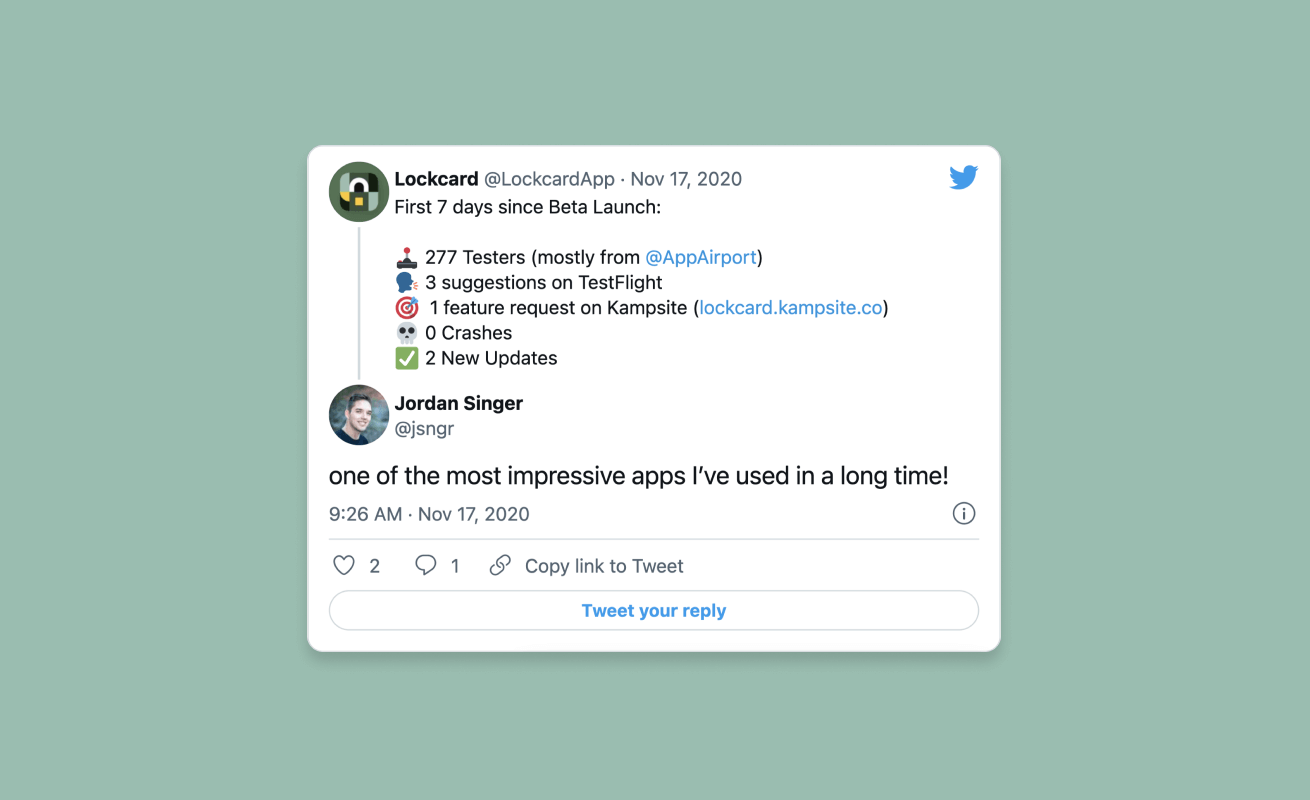 The development of the IOS app was outsourced to a team in Vietnam, which I managed closely on a daily basis. The beta version of Lockcard was ready after 11 rounds of Q&A with developers. We're also partly to blame for it since we changed the scope of some features halfway through. If you're interested in the Figma hand-off file, feel free to reach out.

We decided to open our Beta to the public on November 10th 2020, and got noticed on AppAirport pretty quickly. The feedback was overwhelmingly positive with the founder of @AppAirport Jordan Singer commenting over Twitter:

one of the most impressive apps I’ve used in a long time!

In addition to our blog, which we've been keeping at pretty consistently, Lockcard uses its main Twitter account (@LockcardApp) to connect with more tech-minded people who see value in design and non-intrusive applications.

Our sister Twitter account (@UnlockCard) mimics the use of our app using tweets to teach English words everyday, and encouraging people to comment several times to train their brain into 'active recall'. This is a temporary solution for our Android users out there who have to wait a little longer until we build it.

The plan is to continue to raise awareness over Twitter and our blog to get more users on the beta, collect feedback, iterate and finally launch public V1 (with paid features maybe), and see how it goes from there!

If you're interested in this space or working with us, DM us over Twitter. We're always looking for passionate people to help.

For the last month, we've been testing out app in the hands of as many people as possible. 10% friends and 90% strangers found over AppAirport and Twitter. We've gotten a lot of good feedback through user interviews, and made some of it public via Kampsite. We are now iterating designs and planning to release the public version to the official App Store in February 2021!

We're honored to celebrate the TestFlight apps and developers who inspired us with their unique and joyful app designs.https://t.co/jM8GJuSlKl

We won an award for best app design since @AppAiport's inception half a year ago. We were selected among a cohort of 626 other beta apps, which totalled 1.1 million app views. What makes me so happy is that Jordan, the founder of @AppAiport himself, uses Lockcard and commented very nice things of it.

We collaborated with Rowland for my very first motion design project, celebrating our official launch in the AppStore. The artistic direction experience from castlelab came in handy here to finish this project in very little time, and to produce an ad of respectable quality.

I don't remember exactly how we got so many downloads on the first week, it was all very exciting. We had accumulated over a few dozens signs-up from our website, but most of the users were on the TestFlight version of our app, and so naturally they switched to the official public version... I think.

The app didn't blow up like you see happening everyday on Twitter; after a few days, the number of downloads dropped to 5-10 per day. And since Lockcard wasn't monetized, Xinyi and I both started separate full-time design contracts around March 2021, and Lockcard became less of a priority for a bit. We spent on avg 10hr a week, and we found a junior iOS developer, Kouzi (senior at university, starting WeChat), help us maintain the app and substitute the costly team of contractors we had originally hired to build out Lockcard V1.